Barcelona Travel Guide & the best tips on what to do there! 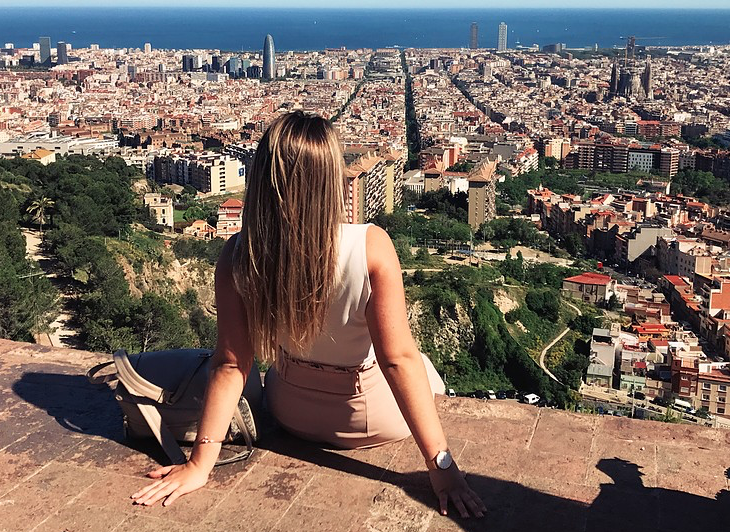 Although I’ve lived for several months in Madrid, I can’t deny that Barcelona is the prettiest Spanish city I’ve ever been to. Everything about Barcelona looks like a fairytale, with its vibrant colors, its peculiar architecture, the street artists, the huge palm trees…

I had the privilege to go to Barcelona three times already. I went in January of 2016 with a friend, while I was on Erasmus in Madrid; I also went in 2017 with my Masters class, with the purpose of going on a “field trip” at a Business School there, and I went back in 2018 to visit a friend. I know the city quite well by now!

How to get there

If you’re departing from anywhere in Europe, there are plenty of flights to Barcelona, as it has a very central airport. If you’re from Spain or France, you can get on a high speed train – if you book in advance, the price is not so high. I paid 30€ for BCN – MAD when I went there for the first time.

Of course you can also use Flixbus, the cheap bus I always talk about. It’s truly the best means of transporation when you’re traveling on a budget!

From the airport to the city center you can catch the AeroBus. The ticket price if about 6€ and it gets you to the center in about 20 minutes, to Plaza de Catalunya, from which you can get to anywhere in the city by catching the metro.

Where to stay and how to get around

There are a lot of cheap hostels advertising that they’re close to Sagrada Família or Parque Guell, but that doesn’t mean they’re in the center. In fact, those two touristic points are a little bit far away from the center (especially Parque Guell) so don’t get fooled.

Instead, stay near Para.lel, Diagonal, Sant Antoni, Universitat, Barri Gothíc, Les Rambles… Getting around in Barcelona couldn’t be easier. You can choose to walk (trust me – you’ll walk a lot) or you can take the metro. It’s possible to buy 10 metro tickets for 10€, it’s the cheapest option.

Where and what to eat

In Barcelona you have restaurants for all tastes and wallets, but it’s not as cheap to eat there as it is in other southern European cities.

Tapas may look cheap at first, but when you realize you’ve ordered 20 tapas because all of them look and taste so good, you’ll have a quite high bill to pay. But don’t worry, it’s completely worth it! Spanish food is amazing and you’ll be drooling over your tapas.

Here are some restaurants in Barcelona I really enjoy:

This is a must do in Barcelona and it’s perhaps one of the most touristic points in this city. Here you can understand why I told you Barcelona looks like a fairytale.

This park is really gorgeous and fairy like, with vibrant colors and small, distorted houses which you can visit.

I recommend buying the ticket online in advance, because the park is usually full, especially in the Summer. The price is 7€.

To get to Park Guell, exit on Lesseps, the nearest metro station (green line) and walk for about 15 minutes.

This is an underrated place in Barcelona but it’s undoubtedly my favorite. Not many people know about it, but it’s located at the top of a mountain and it’s full of wrecked bunkers from the Spanish civil war.

It’s quite dangerous, though, but that’s what makes it so fascinating. You can even see the bathroom tiles on the floor from the bunkers. For me, this is the best place ever to chill and watch the sunset.

If you’re feeling brave, you can stand on the edge to take some cool photos – a lot of people do it. But please, please, be careful – I’m not trying to promote dangerous activities here.

I would suggest visiting Bunkers right after you visit Park Guell, as it is pretty close – like a 40 minute walk, always going up. This is the worst climb you’ll ever have to do in Barcelona, but it’s worth it.

If you want to take the metro instead, exit on “El Carmel” (blue line), but be aware that you’ll still have to walk a lot.

3. Wander around the Gothic Quarter

For me, this is one of the most interesting and mysterious neighborhoods in Barcelona. In this area you can find a lot of churches and cathedrals, gothic architecture, dark streets and really, really cool cafés and bars.

Here is a sneak peak of what the streets look like in the Gothic Quarter. Pretty awesome, right? While you’re at it, make sure to visit Les Rambles as well, the most visited street in Barcelona.

It’s one of the prettiest parks I’ve ever been to (I have the feeling I keep saying this about Barcelona). This fountain is purely majestic, but the photo doesn’t do justice to its beauty. This park is pretty big, so you can chill, take a walk and take some photos on this beautiful fountain (yes, you can go up the stairs).

To get there, exit on “Arc de Triomf” metro station or take a 40 minute walk from the Gothic Quarter.

This arch is definitely more colorful than the ones I’m used to see. It’s nice to walk around this sidewalk and just admire the arch, the palm trees and the street artists who always perform here.

This is always under construction but it’s a must see in Barcelona. It’s spooky and magnificent at the same time. It was designed by Gaudí in the beginning of 1882 and yes, it’s still under construction! The tickets to enter are 20€.

Another sightseeing point in Barcelona, you can’t miss Palais de Montjuic. It has a beautiful view to the city and the palace is located on a hill. In the evening, there’s a stunning light and water show in that big fountain.

These peculiar houses were designed by Gaudí in the early 1900’s and Casa Milà was declared World Heritage Site by UNESCO, like Sagrada Família and Park Guell. They are located in the Eixample neighborhood.

9. Take a walk in Barceloneta

This is the seaside and it’s very pretty and lively. If it’s a warm day, you can have a swim in those calm and hot mediterranean waters. You’ll also see plenty of skaters and beach goers and, overall, the ambience is really cool!

There are also a lot of bars and clubs in Barceloneta, so this is one of the best places to go out at night if you’re fancying a drink.