Budapest 3-day Itinerary: What to Do & Visit, Historical Sites & Nightlife

The last time I traveled before COVID-19 and lockdowns hit was to Budapest. During Christmas of 2019, when I was in Lisbon, I heard two of my girl friends saying they were thinking about visiting this city before Spring. Of course I couldn’t miss the opportunity – I hadn’t traveled to a European city in ages, and what’s best than a long-weekend girls trip?

We ended up booking our tickets to the 28th of February – yes, I still remember this date because two weeks after we were under a lockdown. When I think about this, I guess we were really lucky! Sure, there were already some COVID cases, but at the time it wasn’t even perceived as something serious in Europe.

The truth is, I’m really glad we traveled to Budapest. The city is stunning and there’s just so much to do – from cultural and historic sites, to an awesome nightlife and incredibly beautiful and relaxing thermal baths. If you’re going to Budapest, then this 3-day itinerary is perfect for you – we were able to see and do everything we wanted!

I had to include 1st evening here because evenings also count in Budapest, especially if you like to go out and party. Well, even if you don’t, you should at least go out for a drink or a walk and just appreciate the lively Budapest nightlife!

My flight from Amsterdam arrived at midnight and, shortly after, my two friends arrived too on a flight coming from Lisbon. We went straight to our hostel and no, we didn’t stay at a party hostel – that’s too much for us – although there were some crazy guests there too. Our hostel was right in the city center – Wombats City Hostel – and we stayed there because it was really cheap (I paid 27€ for three nights) and we didn’t plan on spending much time in our room.

After leaving our bags, we changed clothes and went out to one of the most popular clubs in Budapest, Instant-Fogas. The best is that it was just a few blocks away, so we arrived there around two in the morning (yes, it took us a long time to get ready). Fogas is a ruin bar, that is, it was built on ruins, and has seven different dancing rooms, so you can find music for almost every taste. Also, drinks are incredibly cheap there, so you can expect to encounter a lot of terribly drunk people.

Overall, the experience was ok – it was full of Erasmus students, and on every step we took, there would be a random dude asking us where we were from. We were asked this so many times that we even changed our WhatsApp group name to “where are you from” – yes, it was funny but annoying at the time.

Nevertheless, I think everyone that enjoys going out should experience Fogas. I’m sure you’ll enjoy it… at least, after a few cheap whiskey-sodas. The best part was when we left at 5 am and decided to have 50 cent pizza at one of the many pizza restaurants around Fogas. There’s nothing like eating extremely greasy food after a night out, if you know what I mean.

1st day in Budapest – yay! Except my brain wasn’t feeling that enthusiastic about getting out of bed after only 4 or 5 hours of sleep. But there’s nothing like an espresso (or two) to help you wake up and move your body, because there’s so much to explore!

One of the greatest things about Budapest is that you can walk anywhere. It’s also the best way of exploring the city, finding cute cafés and restaurants and just get lost.

And that’s exactly what we did – we started by visiting the Széchenyi Lánchíd Bridge, the bridge you see on every Budapest postcard. By this time, I was pretty excited – the city is incredibly beautiful and the view from the bridge is stunning.

I didn’t do this when I was there because it was quite cold, but my friends @ineesmoura and @jantonions went in the Summer and did something really cool: they bought a pizza and some beers and had dinner on the bridge. So, if you’re going in the Summer and enjoy picnics with incredible views, then you should definitely try this!

After the bridge, we visited Buda Castle and Fiserman’s Bastion, which are right after the bridge. You can take the funicular or walk – we walked to enjoy the views. I must say that Fiserman’s Bastion is incredibly pretty, with its neogothic architecture. It also provides a remarkable view of the Danube and the Pest side of Budapest.

We then had lunch on a restaurant in Buda, where we tried some local dishes – goulash and chicken with paprika. Both were really good, and I hadn’t expected to become such a big fan of goulash, which is basically a very liquid beef stew.

After lunch, we crossed the bridge again to the Pest side and we visited the Hungarian Parliament, another absolutely beautiful monument. We didn’t get in, but they also do guided visits which cost 17€.

Right in front of the parliament, you can find the Shoe Memorial, by the river. These little shoe sculptures tell a very sad story: they were made in memory of the Jews who were shot by the river, where their bodies fell. They left their shoes behind because shoes were considered to be very valuable at the time.

After all of this walking, we needed a break. It was already evening too, so we decided to visit the most popular rooftop in Budapest: 360 Bar. It is so popular for a reason: the vibe is really cool, it has an amazing view (you can see the illuminated Parliament, the bridge and the Bastion) and the drinks are quite nice too. Don’t worry if it’s cold – they have little igloos where you can sit and be protected from the cold and, because they’re transparent, you can still enjoy the views.

We then decided to get dinner at one of the Street Food Markets – Street Food Karaván. This is a very cool market with several caravans selling street food. You can find everything there – from Hungarian food, to burgers, Middle Eastern food and even several vegan options. It’s definitely worth a visit, since the food is really good and it’s fun.

Right around the corner, you can find Szimpla Kert, also one of the most famous ruin bars in Budapest. I can’t count how many times friends who’d been or lived there recommended this bar, and when I visited, after dinner, I could see why. I can’t even begin to describe the décor – you will find bathtubs, broken TV’s and freaky decoration all around. It’s probably the most original and cool bar I’ve visited in my whole life, and that says a lot – so make sure you don’t miss it and have a good time there!

Thankfully, we didn’t spend that much time in Szimpla Kert and went to bed around 2am, which was considerably better than the previous night. Also, we were pretty excited because we were visiting the most famous thermal baths – Széchenyi Baths!

But first, we strolled around Heroes Square. There, you can find the Fine Arts Museum and the Arts Palace. In the center of the Square, you’ll find the Millenium Memorial, with the statues of the leaders of the seven tribes who founded Hungary in the IX century, as well as statues of other Hungarian historical figures.

It was then time to soak in the famous Széchenyi Baths! These baths are from 1913, have 18 thermal pools and the building itself is very beautiful, with neo-baroque architecture. The entrance fee is around 30€ for nonresidents, and you can rent towels and a bathrobe there too for 12€ (although you do have to pay a deposit for this).

We had a great time just swimming and soaking in the popular outdoor pool and also visited the aroma sauna, which was one of my favorites. It’s a great experience, so you can’t miss it!

After the baths, we visited Margaret Island, which is a very famous island in the middle of the river, with a huge park. However, we left after being there for 20 minutes since it started pouring! I’ve heard that it’s better to go there in the Summer, where you’ll find many people exercising, doing picnics and hanging out. It’s also home to one of the most famous Budapest festivals, Sziget.

With the rain, our best chance was to visit the museum we had wanted to visit – the House of Terror. The museum has that name for a reason, as it is a memorial to holocaust victims. It also used to be a torture house, so now it tells the story of the victims through hard-to-watch videos, testimonials, photos and letters. If you like history and would like to learn more about the holocaust, then you should visit this. Despite being sad, I really enjoyed the visit.

On that evening, we decided to have dinner nearby the hostel. We ended up having Schnitzel at a restaurant on a busy street, and it was really good! After dinner, we went on an evening cruise in the Danube river. The cruise was stunning, with every monument in Budapest being illuminated and reflecting the lights on the water.

Because we didn’t have enough, we decided to go to other thermal baths that some friends also recommended. They’re the Géllert Baths, and the building itself is indeed really pretty. You’ll find a large hall with a pool, baroque decoration, full of gold details, statues and, of course, thermal baths. Some of them are so hot that I couldn’t handle being inside for too long! Another positive thing about these baths is that they’re much less crowded.

After a very relaxing morning, it was time to have lunch and say goodbye to Budapest, since my flight back to Amsterdam was in the afternoon. But we still had time to go to a nice place, so we decided to go to New York Café, the most beautiful restaurant I’ve ever visited, and I’m not exaggerating.

The restaurant is just stunning, with frescos painted on the ceiling, gold details everywhere, a live band playing classical music and great service. We felt so good there! I also had the best goulash of the whole trip. If you’re visiting New York Café, you’re not just going out for food – you’re having a whole experience.

And this is it! After lunch, I went straight to the airport and flew back home. I spent an amazing three days in Budapest and I want to go there again sometime in the future. I really think this is a perfect weekend-trip destination if you live in Europe. Let me know in the comments if you have any questions about this Budapest 3-day itinerary! 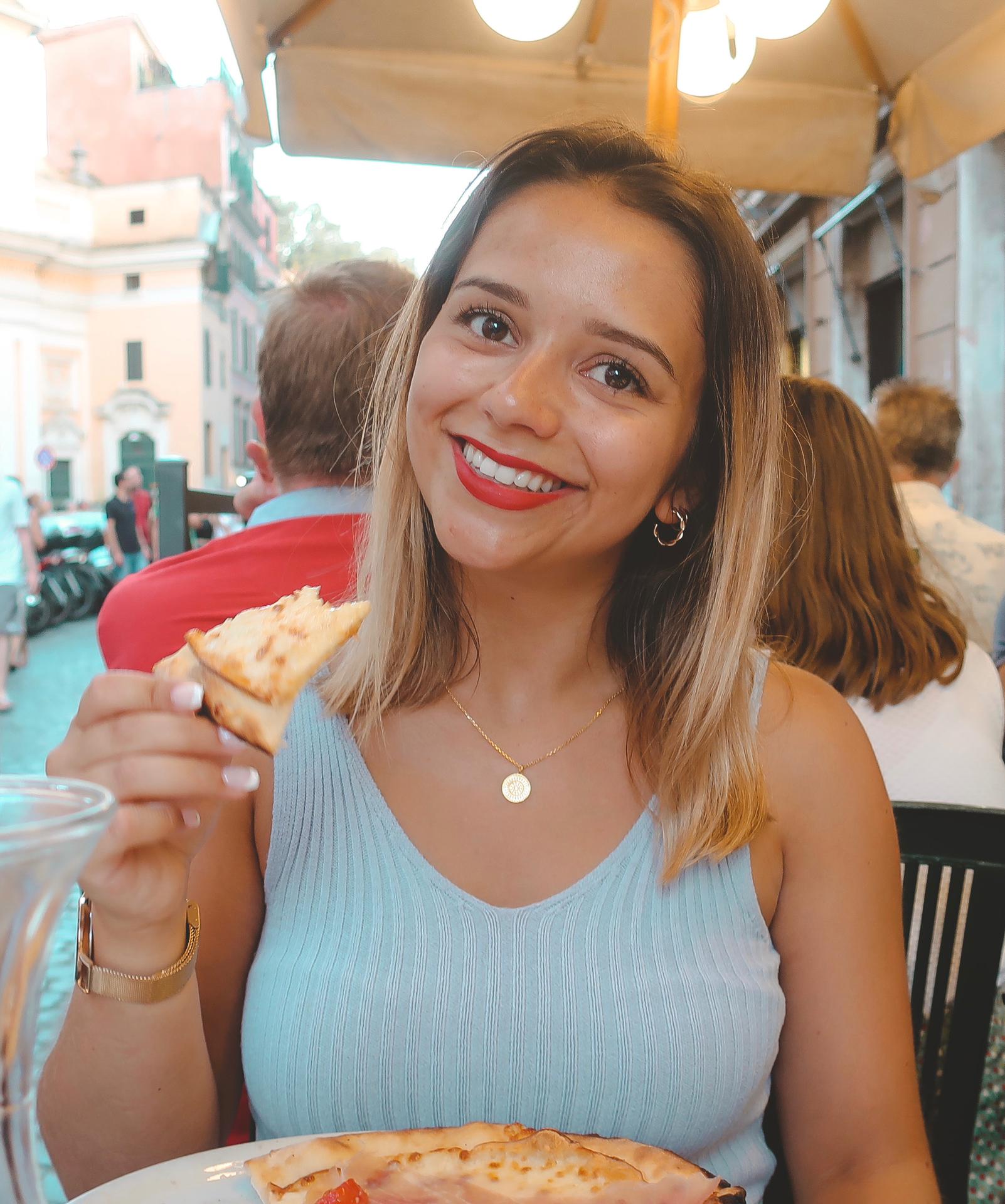